GRNews
GreekReporter.comHollywoodBetty White Mimics Miley Cyrus for 'Off Their Rockers'

Betty White Mimics Miley Cyrus for ‘Off Their Rockers’ 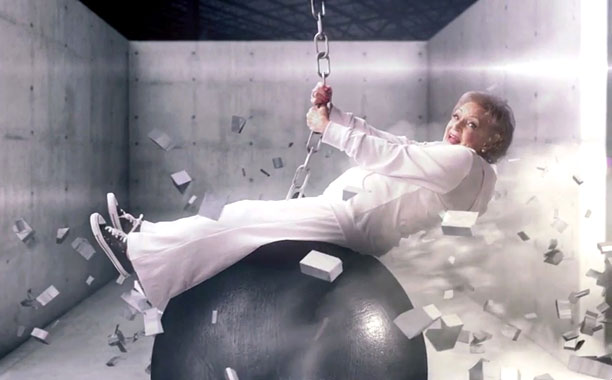 Betty White’s hidden camera show, “Off Their Rockers,” may not have been picked up for another season by NBC, but it’s found a new home on the Lifetime network and has a “shocking” promo to kick things off.

In the 30-second comedic bit, the always funny and lovable White spoofs singer Miley Cyrus’ antics in her controversial video for the hit single “Wrecking Ball.” Famously swinging around naked on a large ball and chain and licking a sledgehammer somewhere in between, many found the pop star’s video a little too risqué. White also pokes fun by asking for, and then kissing, a sledgehammer, as well as making a reference to Cyrus’ infamous VMA performance, in which the 20-year-old singer hopped around the stage gyrating with a foam finger.

Check out Betty White as she channels Miley Cyrus:

The third season of “Off Their Rockers” doesn’t have a premiere date yet, but Lifetime ordered 20 new half-hour episodes. The reality show features senior citizens, a la “Candid Camera,” pranking the younger generation just for laughs.