The Ancient Theatre of Sparta in Way of Restoration 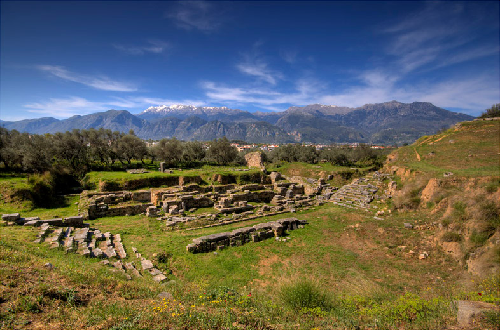 It stands for its size, quality and the luxury of its construction. The ancient theatre of Sparta, built around 30-20 B.C., is located north of the contemporary city of Sparta, and remains a distinguished monument to this day, despite the ravages of time and past adventures, such as when its auditorium was destroyed to make Byzantine houses and shops.
In ancient times, the theatre used to deeply impress the visitors. For example, the Greek traveler and geographer of the 2nd century AD Pausanias described it with the following words: “this theatre made of white stone is sight worthy.” Its size was also impressive as it was one of the largest ancient theatres, holding a capacity of 16,000 spectators, following the tradition of the earlier Peloponnesian theaters of Epidaurus and Megalopolis.
The visible construction today dates back to the Roman times, with many elements of later times until the end of the 4th century A.D. One of its distinguishing features, is that it consisted of a mobile stage, as the theatre also used to host several events. The stage was kept in a special “stage-case” under the hangar that was built at the west lane. In addition, one of the remarkable elements of the monument is the quality and luxury of construction, which is reflected by the local white marble used in its building.
Since it is considered to be of immense importance, the recent recommendation of the Central Archaeological Council, gave the green light for the study of its rehabilitation.
The study focuses mainly on the damage that the stone elements of the theater have suffered (those made of marble and limestone) from erosion, the loss of material and the fractures caused by the growing of plants, the engravings and graffiti, while relevant damage has also occurred at the masonry of the monument. The road is now open for the correct documentation of the situation, of the theatre parts, and also for the cleaning off of all deposits, such as vegetation and microorganisms, or those brought by human hands such as graffiti.