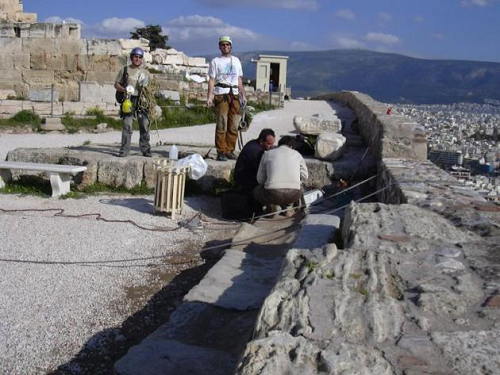 The Department of Geology of the Aristotle University of Thessaloniki (AUTH), in celebration of the 40 years of its function, is organizing a photo exhibition entitled “40 Years of Geology Department.” The exhibition presents the course of the Department of Geology from its opening until today, through forty photos which aim to show its work and offer.
Visual “answers” to many questions are given by the forty photos which will be presented from October 22nd to November 1st at the ground floor of AUTH’s Administration Building, in Thessaloniki, Greece.
The exhibition will be also presented at Thessaloniki’s Archaeological Museum and the City Hall.
Some of the questions which will be addressed at this exhibition are: What can one search for under Acropolis? What optical illusion is created because of the landslides on Ropoto of Trikala? How can the Meteorological Centre of Mount Olympus be transformed into an ice sculpture.
The Department of Geology celebrates its 40th anniversary this year, having developed a complex action and winning a widespread praise for its educational and research work, from its external assessors.
In addition, the Department is at a very good position in the international rankings (e.g. 101 in the QS World University Rankings between 10,000 other similar departments).
Furthermore, the Geology Department offers a wide social work with the functioning of the telemetric seismological network (Seismological Station) and of the meteorological stations, as well as with the provision of high quality services towards the state and the units of local administration.