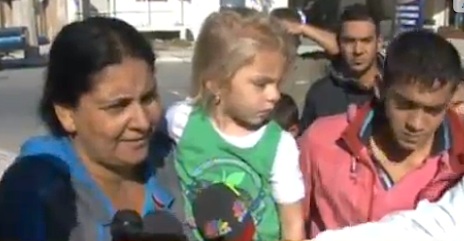 After news of the couple accused of abducting the little blonde, green-eyed girl in Greece, Roma now seem to face a stigmatization as being child traffickers. Amnesty International is fighting to protect their rights and condemns the unfair and often illegal evictions from their homes, while media tries to unveil the truth.
The Roma community in Greece fears being stigmatized now more than ever, as Maria’s case made many believe that Roma are stealing children. Now, they are doing everything in their power to prove the opposite.
Many of them didn’t hesitate in showing their children on camera, in order to support that not all light featured Roma children are stolen.
“Who says that the Roma community does not have childen with white skin? You can see my granddaughter… I am black with dark features and she is blonde with blue eyes,” said a Roma grandmother during an interview (picture above).
“We know these cases exist, but they involve Bulgarians, not Greeks like us. There are not transactions involving children here,” insists Babis Dimitriou, the President of a local Roma community. He says that “the 40-year- old woman, who had registered Maria as her own child, cared for her even better than for her own children.”
“We are family people. After this event, the police have been searching everyone. Isn’t this racist?” stated a 42-year- old Roma.
This morning a Greek TV station, visited one of the Roma camps in order to interview members of the community. The journalist kept asking “What is your opinion? What about the parents, the defendants for kidnapping and trafficking of their own child? Do Romas still face social racism? “etc.
During the interview, two of the Roma speakers with dark features, were also holding a blonde little girl with blue eyes, and no one asked anything about her! This means two things:
First, it is obvious that in Roma camps in Greece, there are more children with light features but they are still children of the Roma!
Or that there might be cases that the Roma have somehow acquired children that are not their own and this is why they have light features. The police  is now investigating many cases in Greece where their is suspicion of children trafficking by the Roma.
Roma try, in every way, to prove, that even if the two arrested parents are guilty, that doesn’t mean that all Roma are trafficking children!
“The case doesn’t reflect on all of us,” said the president of a local Roma community, Babis Dimitriou.
Though, according to the police, there are many cases of child trafficking with Roma from Bulgaria in Greece, not all Roma steal or take part in this illegal activity. Many of them try to make a living in the camp during the economic crisis by selling fruits, carpets, blankets, baskets and shoes at local markets.
Many Romas are wary of media attention and resentful that what they say is neglected by the state. The only thing authorities have provided, they say, is the prefab houses that have been replaced by tents that they were living in eight years ago. They say they are already considered by some, to be social outcasts, thieves, beggars and now child traffickers.