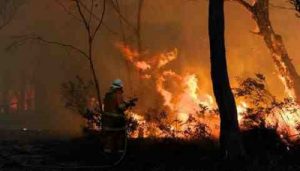 The bushfire that has broken out in the Blue Mountains area, near Sydney, caused significant damages to the Greek Orthodox Monastery of Saint George.

According to an announcement of the Holy Monastery, it is closed due to the significant damage caused by the devastating fire.

Almost ten expatriates were found at the Monastery on Sunday, who were there protecting it. Many houses, warehouses and trees were burnt, but the two churches remained intact.

The Abbot of the Monastery was slightly injured in his effort to extinguish the fire.

In the announcement, the Monastery asked faithful visitors to avoid visits to the Monastery as long as it is closed “because it is dangerous.” The Bishop Seraphim will make relevant announcements to hold a fundraiser in the Greek-Orthodox churches in order to repair the damages.