Collaboration Between Unicef and Olympiacos F.C 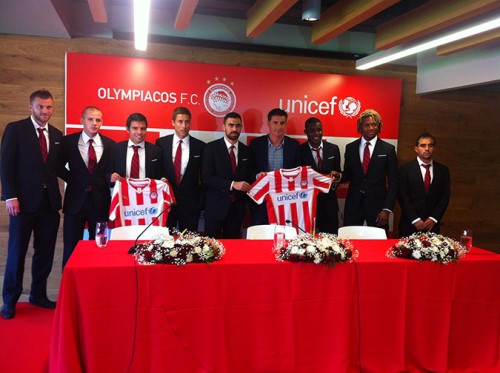 Today, PAE Olympiakos and UNICEF announced their collaboration to immunize children in countries where there is an urgent need. Cooperation aims to raise money and awareness in Greece and worldwide.
The UNICEF’s campaign titled “100% Campaign” is contributing to immunize children because the modern vaccination programs are not enough.
Globally, 1.5 million children are dying each year from diseases that could have been avoided by vaccination. This means that a child dies every 20 seconds because about 20 percent of all children do not take basic vaccines.
Due to poverty, conflicts, poor infrastructure and limited power of governments are factors making it difficult to cover them. The “100% Campaign” aims to ensure that all children in remote areas will receive life-saving vaccines.
The Olympiacos F.C. is aware that UNICEF provides lifesaving vaccines to more children than any other organization. Therefore, Olympiacos through “100% Campaign” is placing the UNICEF logo on the jerseys of players. The goal is to gather two million euros over the next two years which equates to rescue 50,000 children.
The Chairman of Olympiacos F.C. Vangelis Marinakis declared that since the foundation of Association in 1925, Olympiacos as a football team represents an idea, a movement, a set of values that brings people together, setting as a priority, the welfare of children in the world. These are the values on which Olympiacos can base the new partnership with UNICEF.
In addition, the President of the Greek National Committee of UNICEF Lambros Kanellopoulos noted that the alliance between Olympiacos and UNICEF is a milestone for humanitarian action UNICEF Greece.
He added that this collaboration will enable the campaign to move more quickly in order to protect children’s lives and rights throughout Greece and abroad.

Government spokesman and Deputy Minister to the Prime Minister Christos Tarantilis resigned his post on Sunday in a letter to Kyriakos Mitsotakis.
Culture

A Greek sitcom called ''Familie Foukara'' that was created by Greek actors and actresses who live in Germany has a new TV series airing on Youtube.
Greece