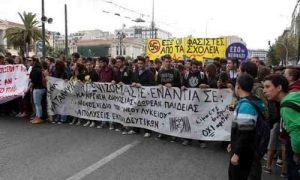 The Federation of Administrative Staff in Higher Education (ODPTE) had filed a complaint against the Minister of Administrative Reform Kyriakos Mitsotakis and Education Konstantinos Arvanitopoulos, as TO VIMA reports.
The administrative employees demand the adjournment of the deadline for submitting their details for the evaluation and suspensions. The federation claims that both the Ministers threat of immediate suspension on failure to comply with their order infringes the constitutionally-protected right to strike.
The Rector of the University of Athens, Theodosis Pelegrinis, sent two letters. In the one, he asks the Ministers of Finances and Administrative Reform, to suspend the suspension measure “for a reasonable amount of time,” so that the University can be allowed to operate “under conditions of reconciliation, meritocracy and calmness.” The other letter addresses the Minister of Public Order Nikos Dendias- Mr. Pelegrinis explains that the planned suspension of the entire security staff department will result in the institution’s buildings and assets being totally unprotected.
According to the article from TO VIMA, on Thursday, representatives of the Universities attended an initiative of the MEP Nikos Chrysogelos at the European Parliament, where they referred to the effects of the suspension measure and the underfunding of higher education. The representatives stressed that the government was being hasty and irresponsible and demanded the realization of a proper evaluation in order to reach safe conclusions regarding staff needs.
Meanwhile, the Prosecutor of Thessaloniki has brought on charges for misconduct and breach of duty against the University of Thessaloniki. The charges were for refusing Arvanitopoulos’ request to submit lists of administrative employees to enter the suspension scheme. The administration of the University of Thessaloniki has responded that it cannot supply the lists due to technical difficulties attributed to the ongoing strike of administrative employees.
Finally, administrative employees of the National Technical University of Athens have announced that the Ministry of Education’s administrative employee registration platform, is lacking essential security checks, such as secure passwords and encryption, leaving it open for abuse. The employees also criticized the Ministry for failing to make any mention of the relevant personal data protection legislation.