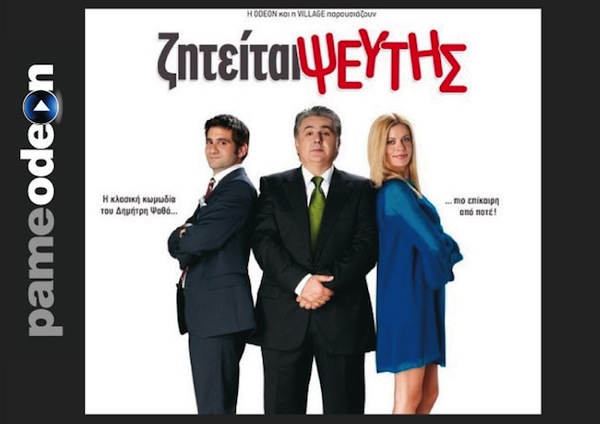 The Greek leading film distributor and producer, Odeon S.A., and Greek Reporter have teamed up to promote Greek cinema to a new worldwide audience, through PameOdeon.gr, the new video on demand platform

The first film for our Greek movie Fridays, is the Greek remake of the old classic “Liar Wanted,” a film that pokes fun at Greece’s corrupted political life, and puts a hilarious spin on a miserable situation!

When Dimitris Psathas wrote the script for this movie, he certainly couldn’t imagine that almost 50 years later, a re-release would be so timely…..but then again, it’s no surprise that policy, lies and corruption are something of a timeless concept.
The comedy is about the new Minister of Health, Theofilos Ferekis, who must deal with public backlash from a load of false promises he made during the pre-election period. He soon realizes that politics isn’t an “easy game,” and when citizens start complaining, his public image is real in danger! The new Minister of Health soon realizes that making a successful political career is way more difficult than he thought, and ultimately decides that his public image is more important to him than his projects…….
Unexpectedly, a young man by the name of Theodoros Parlas comes into his life. Who is Theodoros Parlas? He is a smart, conniving, unemployed man, and an expert liar! His friends call him Pseftothodoros (which in English means “Lying Theodore”), and the funny thing is, is he even introduces himself this way to promote his unique professional “liar skills.” He believes that a liar can always survive, find a job and even make a career. According to him, there is always a need for lies… Especially in politics!
Theodoros Parlas is indeed the man whom Theofilos Ferekis needs most. He has a great “talent” for making false promises, providing answers when honesty can’t, and finding hilarious ways to avoid situations. Soon, Theodoros becomes Ferekis’ “right hand man,” and one lie leads to another…
Theodoros gets himself into trouble with his cynical attitude as he becomes confronted with his own lies and is almost defeated by the Minister’s wife, simply because she’s beautiful and perhaps even better at lying than he is! In the end, our hero makes a very brave and honest move, making anyone wish that they were as capable as he is.
This film is an excellent comedy remake from the golden age of Greek cinema. It is a satire of the corruption of political life, and of those who are involved in it. It is interesting to note, that six years after the original “Liar Wanted” was released, Greece, in real life was in a dictatorship.  Ironically, three years after the remaking of the film, Greece found itself in a severe economical and political crisis.
Actors: Ieroklis Michailidis, Odisseas Papaspiliopoulos, Zeta Markipoulia, Pigmalion Dadakaridis
Director: Ieroklis Michailidis
Follow the steps below to watch the film:
PameOdeon.gr makes it easy to watch your favorite films with 5 easy steps: