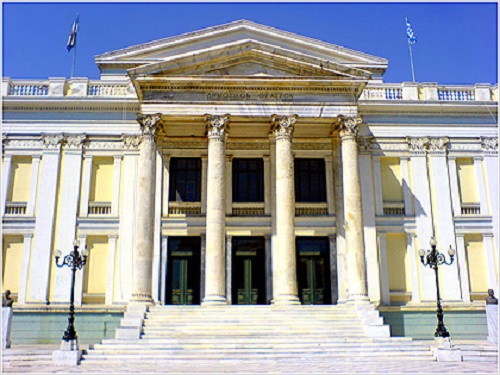 The milestone Piraeus’ Municipal Theater is one of the finest examples of  Greek architecture during the 19th century. The building was designed by the architect Ioannis Lazarimou and is based at the Theatre de l’ Odeon in Paris. The construction began under Mayor Aristides Skylitsis and was unveiled in 1985, under the Mayor Theodoros Retsinas.
The theater is alive for more than a century, filled with many events over the years. Even the immigrants of the Catastrophe of Smyrna housed there, unfortunately causing a lot of damages. The first renovation took place in 1926 and after WWII underwent four renovations.
The recent renovation is a sign of “second life” and the Greek “theater family” have great expectations. The Piraeus’ Municipal Theater will open its doors to the public on October 22. It will be officially opened by the President of the Greek Republic, Karolos Papoulias and the Prime Minister Antonis Samaras. A six-day program of celebrations is scheduled.
“The Municipal Theater is the flag of Piraeus, as the civilization is the Flag of Greece. It is the symbol of hope and optimism in this difficult time for Greece. It is our soul and the symbol of a new era for Piraeus,” said the Mayor of Piraeus Bassilis Michaloliakos.