GRNews
GreekReporter.comGreecePatriarch Bartholomew Calls on Monks to Stay Away From Investments

Patriarch Bartholomew Calls on Monks to Stay Away From Investments 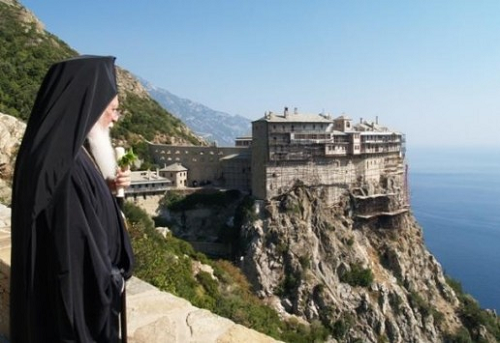 On October 15th, Patriarch Bartholomew I of Constantinople called on the monks of Mount Athos to stay away from financial investments and to completely devote themselves to their mission.
The Ecumenical Patriarch, who is on Mount Athos since Tuesday the 15th in order to officiate the celebrations for the centenary of the integration of Mount Athos to Greece, was very clear in his speech to the monks.
Patriarch Bartholomew appeared to be well aware of what is happening in Mount Athos’s society, and he talked about the unfavorable conditions there, due to the general crisis of the Greek state.
During the Divine Liturgy, that was celebrated on Oct 16th at Protato, the cathedral of Karies (the capital of Mount Athos), the Ecumenical Patriarch mentioned the issue of the taxation of the monasteries and of Mount Athos, a subject that provoked a rupture in the relations between the Greek government and the monks of Mount Athos.
Regarding the Government-Mount Athos “conflict” for the privilege of tax exemption, which was not named but rather clearly described, Patriarch clarified that he does not intend to accept any discussion about changing the status quo of Mount Athos.