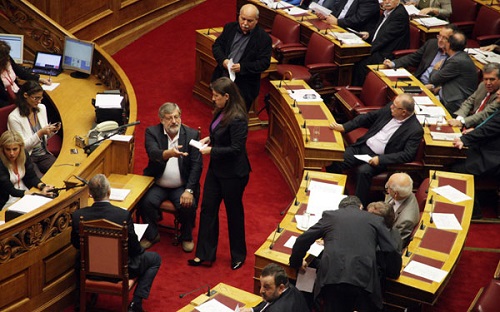 The Greek Parliament voted to lift the immunity of the 6 Golden Dawn MP’s after their involvement in the murder of Greek rapper, Pavlos Fyssas. Regarding the case of Giorgos Germenis, Panayiotis Iliopoulos and Eustathios Boukouras, 246 votes were recorded in favor and included a cancelled ballot paper belonging to the independent MP Nikos Nikolopoulos.
Concerning the two cases of Elias Panayiotaros, there were 246 votes in favor after the first round, and 247 votes in favor during the second voting.
The votes regarding Elias Kasidiaris were counted at 247 votes in favor of the lifting of his immunity. Finally, there were 246 votes in favor of lifting the parliamentary immunity of Chrysovalantis Alexopoulos.
A few hours ago, Mr Elias Kasidiaris and Elias Panayiotaros gave a brief speech discussing conspiracy against them. They said that Golden Dawn was not going to participate in the voting process, in order not to legitimize the overthrow of the polity being attempted with the persecution of the Golden Dawn MPs.
The Greek government says the party operates as a criminal organization. Three other Golden Dawn members, among them Golden Dawn leader Nikos Michaloliakos, have been put in prison, accused of running or participating in a criminal organization.
The Golden Dawn party has 18 lawmakers in the Greek parliament. Most of them are alleged to be implicated in several criminal actions against immigrants and other political and social enemies.