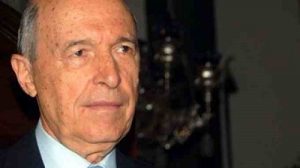 Former Prime Minister and PASOK leader Costas Simitis gave his backing on Tuesday to an initiative to create a new center-left alliance, as ekathimerini reports.
Costas Simitis wasn’t among the 58 members who signed the relevant declaration made public on Monday, but he said he is in favor of the effort.
“I applaud the move made by the 58 members. It is along the right lines and may help get us out of a dead-end,” he stated.
The former Prime Minister spoke at the presentation for the first volume of ex-Cypriot President Giorgos Vassiliou’s biography in Athens.
According to ekathimerini, Simitis criticized both New Democracy and SYRIZA, for fueling polarization, saying that “it prevents us from overcoming our shortcomings”.
In an interview with Ethnos newspaper, Democratic Left (DIMAR) leader Fotis Kouvelis, also welcomed the attempt to form a common platform for the center-left to rally around. However, he ruled out the possibility of his small moderate left party cooperating directly with PASOK in the next elections.