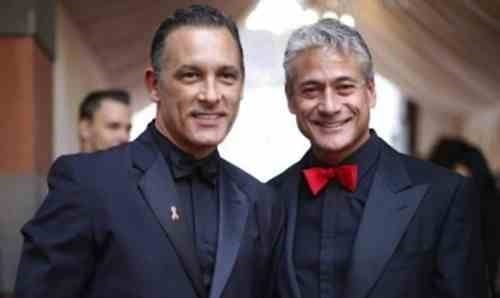 Greg Louganis, the living legend of diving, tied the knot with his beloved partner in a romantic ceremony in Malibu, on Saturday the 12th of October. The Olympic Champion became widely known for his personal life, when he publicly admitted that he is gay, as well as revealing that he is suffering from AIDS. He wed his other half, Johnny Chaillot, and on Saturday they made vows of eternal love and faith in front of 160 guests.

Louganis is of Samoan and Swedish descent but his teenaged parents gave him up for adoption when he was eight months old to his adoptive Greek-American parents.

The couple started dating in 2012, after meeting through a dating site and a year later were engaged. In an interview with People magazine, Greg Louganis spoke about the man of his life and their upcoming marriage. “I never expected this day would come. I spoke openly with my mother from a young age, and her biggest worry was that I would have a lonely life as I grew older.”  He continued by saying, “she always wanted me to have someone to protect me ,and now that gay marriage is legalized in California, I have found the love of my life and soul mate.” He concluded by saying he is very grateful, and certain that his mom would be smiling down at him.

Greg expressed his amazement in having so many people from all phases of his life during the special night. He was grateful for everyone who was there to celebrate together.  “It is wonderful” stated Greg shortly after the ceremony. “I already feel differently; the ceremony was so representative of who we are.”

The ceremony was followed by the wedding reception, where Barbara Eden, French Stewart, Bruce Vilanch, Dominic Scott Kay, Janet Evans and Nadia Comaneci were among the guests.

Instead of gifts, the couple asked the guests to donate to charities. “We are both in our fifties and don’t need another blender, so we want to offer,” said Chaillot to their guests.