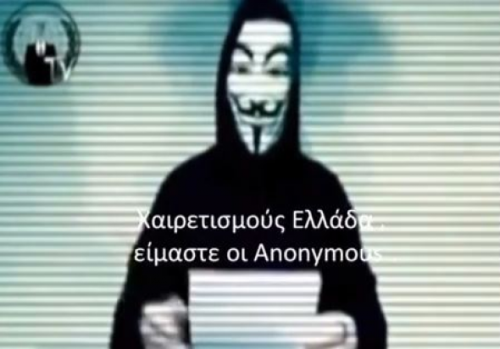 An anonymous group is sending a powerful message to Golden Dawn and using the murder of leftist Pavlos Fyssas as an excuse to do it.
The video-message by Anonymous on youtube starts with a brief reference to Pavlos Fyssas: ” The shocking facts about the murder of Pavlos Fyssas by a member of the Nazi party Golden Dawn have clarified the reality once again. Greece is in a period of intense political derangement that comes from economic misery, resulting in hatred against foreigners or other social groups and movements. ”
The video contains statements of Secretary General of Golden Dawn, Nikos Michaloliakos and his Deputy Ilias Kasidiaris as well the incident with the Deputy of Communist Party of Greece (KKE), Liana Kanellis and Deputy of Coalition of the Radical Left (SYRIZA), Rena Dourou.
The anonymous said that Golden Dawn took advantage of Greek people’s despair, making their way into parliament and  transforming themselves from criminal organization to a political party. They stressed that Golden Dawn injures and kills innocent people just for pleasure.
They are warning Golden’s Dawn members saying: “You are murderers and enemies of democracy. This behavior cannot continue and will no longer be tolerated. You have been convicted of numerous crimes against humanity. Your actions have consequences. It’s time to stop this party.” The Anonymous are coming together in efforts to eliminate the party and will be taking action on October 26.
[youtube]TFeCAHaVKFs[/youtube]

Emirates Airlines, based in the United Arab Emirates, plans to restart flights between the United States and Greece on June 1, 2021
Health