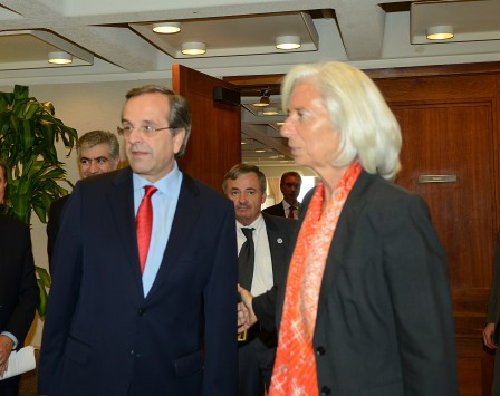 A report from one of Greece’s international lenders, the International Monetary Fund has rattled the government because it estimates that a third bailout of about 6.9 billion euros – with corresponding austerity measures that Prime Minister Antonis Samaras swore he would never impose again – are likely needed, 2.9 billion euros next year.
Greece was blindsided by the report that came only a few days after Samaras met with IMF Managing Director Christine Lagarde in Washington D.C. The IMF, along with the European Union and European Central Bank, make up the Troika already putting up $325 billion in two rescue packages for Greece but it hasn’t made a dent in the country’s staggering $430 billion debt.
There was speculation the bad news could lead Samaras to press even harder for the idea of not repaying the loans in full and giving the lenders – apart from the IMF which is insisting on full payment – with substantial losses just as a previous government did to private investors in 2011, devauling their holdings in Greek bonds by 74 percent.
And contrary to the government’s estimates that it would attain a primary surplus – not counting the costs of interest, social security, municipal budgets, state enterprises and some military budgets – the IMF said that it won’t happen this year. The Greek Finance Ministry said it expected a surplus, the first in 10 years, of about 344 million euros.
In the report, it is explicitly mentioned that additional measures equal to 3.5 percent of GDP (around 6.7 billion euros) will be taken. However, according to the updated Memorandum, in 2014 no new measures are required by Greece, while for the period 2015-2016 these measures will be of around 4.1 billion euros.
Regarding the Greek public debt, the IMF foresees that budgetary estimations for 2013 are consistent, while further estimations assume a new haircut to investors with the participation of the official sector in order to reduce the debt at 124 percent of GDP until 2020.