The Greek cuisine and the traditional local products of Greece are globally famous for their taste and nutritional benefits. They support a balanced diet model, which ensures better quality of life, well- being and physical health in general. Not to mention their unique taste…
It is no coincidence that the last three years 37,000 foreign users, from 145 countries all over the world, looked for Greek products and Greek export businesses through the official Panhellenic Exporters’ Association website. Most visitors came from the U.S.A., Britain, China, Germany, Cyprus, Bulgaria, India, Italy, Turkey and France.
There are actually many traditional Greek products of high quality, good taste and nutritional value! The Greek Reporter presents the 11 most popular.

1. Mastiha Chios
Exclusively produced on the Aegean island of Chios. The harvest is done the traditional way in the 24 villages known as the Mastihohoria of Chios, which have been declared as traditionally preserved settlements according to the Greek Ministry of Culture. Mastiha or mastic has been a Protected Designation of Origin (PDO) since 1997.
The even more interesting part is that mastic can be used and consumed as food, cosmetic or pharmaceutical product. Hippocrates himself had noted mastic’s healing properties, especially for stomach burns and skin diseases. Not to mention its unique aroma! Don’t forget the mastic liqueur… 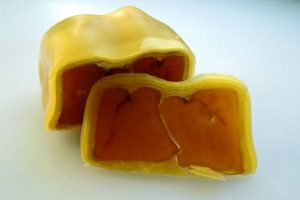 2. Avgotaraho
Celebrity chefs use it for gourmet recipes and luxury shops such as Petrossian, Fauchon and Caviar Exclusives host this Greek product with pride on their shelves. Avgotaraho is a traditional fish roe and gourmet delicacy, among the same category as caviar, truffle and foie gras.
It is produced from the eggs of the female fish ‘kefalos’ or ‘bafa’ (that’s how Greek people call this fish). It is treated with salt and then immersed in wax to keep it intact. Avgotaraho is considered to be the caviar of Greece and is mainly produced in Messolongi. 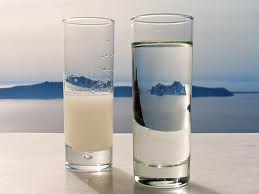 3. Ouzo
A worldwide famous Greek drink, with the most popular being the ouzo of Lesvos (ouzo Plomariou and not only). Ouzo is produced on the Aegean island of Mytilini from the distillation of alcohol, water and perfume materials with  aniseed predominate. But there is also ouzo without anise.
Served in small or thin and tall glasses, you can drink it with or without ice. If you are not used to it or alcohol in general, prefer ouzo with ice. Greek ouzo is usually accompanied by Greek mezedes, offered on small plates and come in quite a great variety! 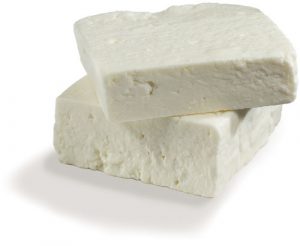 4. Feta
Greek cheese is gaining ever more ground in exports. Ladotyri of Mytilini, Formaela of Parnassos, Katiki Domokou and the “star” of Greek cheese… feta! Greece is second in cheese suppliers in Cyprus with 21, 2% rate and fifth in Sweden with 9, 5%. Feta, the most famous and expensive traditional Greek cheese, is a kind of cheese stored in brine. Feta is mainly being produced in Macedonia, Thrace, Epirus, Thessaly, Central Greece, Peloponnese and Mytilini.
Made exclusively from sheep’s milk with a mixture of 30% goat milk. Famous for its quite salty flavor, white in color, with a particular smell and a variety, which depends on the hardness of the cheese.
The European Commission has registered feta as a protected designation of origin (PDO), meaning that the name ‘feta’ cannot be used in cheeses of similar composition produced outside Greece and the specific product cannot also be produced in a different, other than the traditional way.

5. Olive oil
Olive oil doesn’t need recommendations. It is probably the most popular Greek product, with many exports abroad. Also, the basis of traditional Greek cuisine or recipes and certainly necessary for someone who wants to follow the Mediterranean diet.
It stands for purity, excellent taste and high nutritional value. The most famous are those of Kalamata and Amfissa, but there are actually many places in the Greek countryside where olive oil is produced. 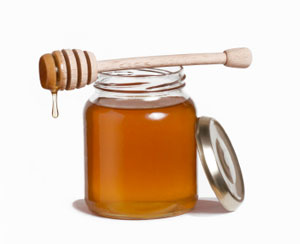 6. Honey
Another traditional Greek product, worldwide known for its high quality, nutritional benefits and beauty properties. Indeed, many shampoos, beauty masks etc. use honey as a basic ingredient. Greek honey has a special aroma and flavor. Many people also support that a spoonful of honey every morning may bring longevity.
Greek honey has a large variety of flavors, fragrances and methods of production. Mostly known is flower honey produced mainly from citrus trees’ nectar, thyme with its exceptional aroma and pine honey, produced in the mountainous regions of Greece from coniferous trees. 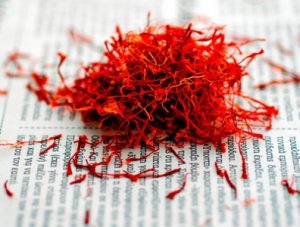 7. Kozani Crocus/ Greek red saffron
In recent years many scientists and nutrition experts discuss saffron’s benefits. Kozani Crocus, also known to locals as “zafora” and “safrani”, is considered to be the best quality of crocus. Today approximately 30% of its production is exported to European countries- such as Italy, France and Spain- Russia, Australia, America and the United Arab Emirates, while efforts are made for exporting to China.
Cleopatra was the first who loved Kozani Crocus for its beauty properties. Nowadays saffron is used for gourmet recipes by famous chefs.

8. Paximadi of Crete/ Barley rusk
Byzantines thought that it was a great creation of the famous in Roman times gastronomist Paxamou. Today paximadi, something like barley rusk, has been associated with the island of Crete and the popular Cretan recipe “dakos” (paximadi, feta cheese, minced tomato, oregano, cappari).
Made with simple means and natural materials it offers the wealth of grains, fiber, minerals and vitamins, especially B complex and vitamin E. 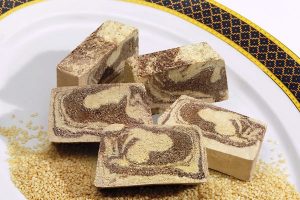 9. Macedonian Halva
Primarily produced in northern Greece, Macedonian halva has sesame as its basic ingredient, which is rich in vitamins E, B1, B2, calcium, potassium, phosphorus and iron.
Greeks prefer to eat Macedonian halva during the Great Lent of Sarakosti before Easter, as it is in the “permitted” food. Ideal for every hour or meal of the day, it can be sweet (halva with cocoa, vanilla, chocolate, honey, etc.) and it even goes with salty food like cheese or bread. Give it a try!

10. Yoghurt
French call it “the milk of eternal life” and our trainers recommend it as the best meal after exercise. According to research those who follow a diet with a daily calorie intake of around 500 kcal and consume at least one meal with yogurt in 24 hours, they lose 81% more fat from the difficult abdominal area.
Greek yoghurt is rich in proteins, minerals, trace elements, calcium and vitamins. It enhances the absorption of nutrients by the body, suppresses infection, facilitates digestion and even fights bad breath! 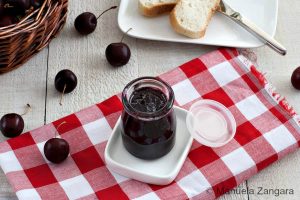 11. Jams
Jams are connected with Greek hospitality- filoxenia, as Greek people welcome their guests with this local sweet. Jams may not be a primary product, but they are indeed one of the most famous traditional Greek products abroad.
Their size is as much as a spoonful of sweet, most of them prepared the time of the year when the fruit matures and comes in a variety of flavors. Cherry, grape, pistachio, fig, apricot, bergamot orange, grapefruit, plum, cherry, quince, eggplant and even more! Another traditional habit wants jams to be served with Greek coffee.