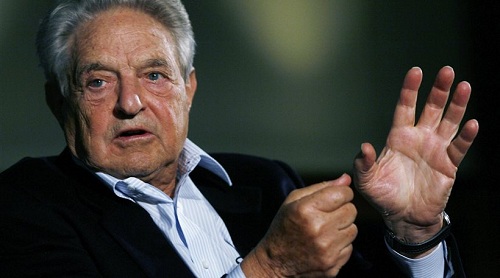 During his interview with Der Spiegel ,financier George Soros called on the German Chancellor, Angela Merkel, to radically change her attitude, “Germany should take over more responsibilities so as to prevent the collapse of the European Union, something that goes against the German interests,” he said.

Among other issues, he stated that “The consequences of the German politics is the emergence of far-right parties like Golden Dawn in Greece … the situation arisen from the European crisis is neither stable nor tolerated.” That buttressed the opinion of analysts who said that harsh austerity measures imposed in Greece, with Germany’s insistence, created the conditions that allowed the neo-Nazi party to rise.

Soros offered advice for Greece’s economic quick recovery: don’t pay back all that you owe to international lenders, a so-called “haircut,” which will let the country write down its debt, although some analysts have said that will just encourage the government go on a spending spree again.

“We all know that the country’s debt cannot be repaid,” said Soros, even though the Greek government said it’s close to achieving a primary surplus – not counting interest in loans, municipal and state enterprise budgets, some military expenditures and the cost of running social security, which otherwise would create a huge deficit.

But, he noted that, “The formal sector cannot currently delete these debts because it would violate a number of taboos, especially for the European Central Bank,” one of the country’s Troika of lenders along with the European Union and International Monetary Fund.

Still, he said that Germany, the biggest contributor to $325 billion in two bailouts to Greece – from which it has profited mightily in interest repayments – should take the initiative. “We should recall that Germany has benefited from debt reductions and extensions after the Second World War, among others from Greece as well, but now appears to be uncompromising,” he pointed out.