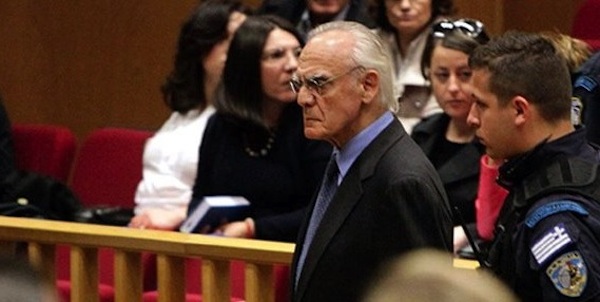 After 18 months in detention, former Greek defense minister Akis Tsochatzopoulos, who was found guilty on Oct. 7 of money laundering and corruption charges, was sentenced to 20 years in jail.
His wife, Vicky Stamati, and daughter received 12-year-sentences while his ex-wife got six and the main prosecution witness, his cousin, Nikos Zigras, got six years after the court said he showed repentance.
The high-profile corruption case involved 18 other defendants, 16 of whom were also found guilty while two were let go due to lack of evidence of their involvement in the case. The other defendants were handed 6- to 16-year sentences.
Tsochatzopoulos, already sentenced to eight years in jail for failing to declare the source of his wealth, has denied any wrongdoing. The case took five months and more than 60 sessions, some featuring a fiery and defiant Tsochatzopoulos hectoring defendants and claiming his innocence.
Tsochatzopoulos’ wife, Vicky Stamati, his ex-wife Gudrun Tsochatzopoulos, his daughter Areti Tsochatzopoulos, his cousin Nikos Zigras, Vicky Stamatis’s brother Panagiotis Stamatis, accountant Euphrosyne Lambropoulou, manufacturer Asterios Economides, businessman George Sachpatzidis, former Secretary General of the Greek defense Ministry Yiannis Sbokos, representatives of the offshore company Morelia, Oratios Melas and Constantinos Antoniades, alleged owner of the offshore company Nobilis, alleged spokesman of Torcaso Nikos Georgoulakis, Giorgos Konstantatos, owner of the bookstore IANOS Nikos Karatzas, and former MP and businessman in the construction sector, Fotis Arvanitis were found guilty.
Pantelis Zachariadis and Spyridon Chatzinikolaou saw their charges dismissed.
Tsochadzopoulos served as Greece’s defense minister from 1996 to 2001 and its development minister between 2001 and 2004. He was a prominent member of the Socialist PASOK party, which dominated Greek politics for much of the past three decades.