GRNews
GreekReporter.comHollywoodAJ Aniston: Jennifer's Punk Brother Will Reportedly Be the Best Man at...

AJ Aniston: Jennifer’s Punk Brother Will Reportedly Be the Best Man at Her Wedding 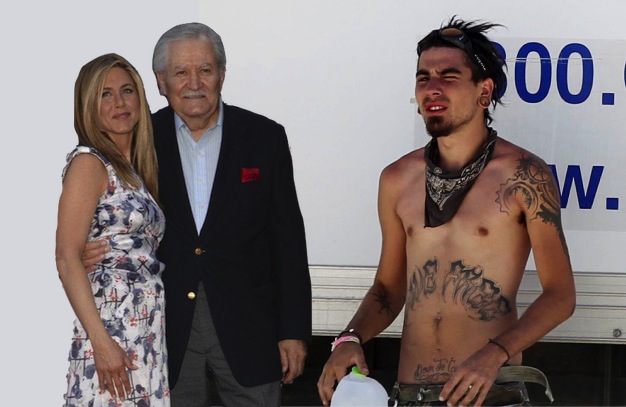 If you didn’t know that Jennifer Aniston has a brother, don’t be surprised. AJ Aniston, John Aniston’s son from his second wife, Sherry Rooney, and Jennifer Aniston’s half brother, has managed to stay away from the tabloids, leading a simple but adventurous life. He seems like a pretty cool guy that doesn’t enjoy the buzz!

24-year-old AJ (Alex John) Aniston is often approached by people asking him about his famous sister but he never says a word. This was also the case when a reporter located him at the Burning Man Festival and asked him to comment on his sister. He replied, “Never.”

“It’s been happening since middle school. It’s been a pain in my (blank) for years. No comment.”

His black mohawk hairstyle and tattoo-daubed body is very different from his sister’s clean-cut style, but recent reports say he will be the best man at sister Jennifer’s wedding to her fiance, Justin Theroux. He may need to wear a suit, something that might not be his favorite clothing style.

“Live Free” is inked across AJ’s stomach; “Down To Cuddle” below his navel. He appears to be an avid adventurer and recently traveled cross-country by train.

In between his travels, AJ purportedly devotes himself to his art, which consists of carvings on animal skulls. One picture shows a discarded skull transformed into a planter. Another carved-up piece is captioned “Racoon of tomorrow.”

His other hobbies include guerrilla improv, cuddle parties and bicycling, according to his Facebook page.

Big sister Aniston’s relationship with her little brother is not clear. She has never spoken publicly about her brother, but AJ did attend the premiere of her movie, “Along Came Polly,” with his parents nine years ago.

Father to AJ and Jennifer, John Aniston is a Greek-American actor, best known for his role as Victor Kiriakis on the NBC daytime drama Days of Our Lives, which he originated in July 1985 and has played since then. He was born in Crete, Greece and came to the USA when he was a child.

Aniston and Theroux have not revealed when their wedding will take place nor who will be the best man, or koumbaro, as we say in Greek.