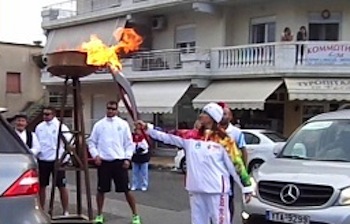 The Olympic Flame which was ignited on Sunday for the Sochi 2014 Winter Olympics continued its journey across Greece on Thursday and is due to reach Athens on Friday afternoon.
On the fifth day of the Greek leg of the Torch Relay the sacred Flame started its trip from the northern Greece city of Florina, a city with a big tradition in skiing, where the previous night it had been welcomed with great enthusiasm by citizens.
The altar was lit by Vassilis Dimitriadis, a former athlete who has taken part in four Winter Olympic Games and today is one of the trainers of athletes competing in the February 7-23 Games.
At the next stop at the lake of Kastoria it was carried by Olympic champions in rowing Christina Giazitzidou and Yannis Christou.
Torchbearers then carried the Olympic Flame to the cities of Grevena and Ioannina, where the altar was lit by the fourth Olympic champion in rowing in the London 2012 Olympic Games, Yannis Tsilis.
The last stop on Thursday was the city of Kalampaka in central Greece, where it will stay overnight.
The Flame will be handed over to the organizers of the XXII Winter Olympics on Saturday in Athens during a ceremony which will be held at the stadium which hosted the first modern Olympic Games in 1896.
(source: Xinhua)