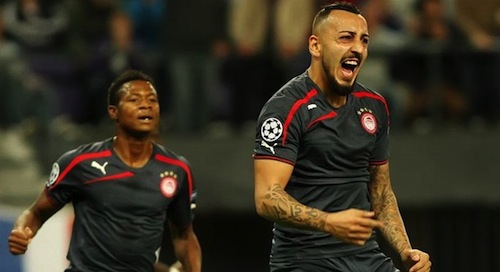 Striker Kostas Mitroglou scored a hat trick to guide Olympiakos to a 3-0 victory over Anderlecht in Group C of the Champions League on Wednesday.
The Greek champion showed Anderlecht the meaning of ruthless efficiency as it pounced on the few chances it created, with Mitroglou scoring freely in the 17th, 56th and 72nd minute.
Anderlecht pushed forward as much as it could in the first half and even won a penalty after conceding the first goal. But Olympiakos’ Spanish goalkeeper Roberto saved the shot from Aleksandar Mitrovic, denying the Belgians side a chance to get back into the game.
Such errors are punished at Champions League level and, as Anderlecht kept pushing forward, Mitroglou scored two more in the 56th and 72nd minutes with fierce long-range shots following his scrambled opener.
It gave Olympiakos its first victory in the group, after an opening home loss to leader Paris Saint-Germain. The star-studded French team beat Benfica to 3-0 on Wednesday to lead the group with six points, three more than Olympiakos and Benfica.
(source: AP)
[youtube]VYSF_2hkfyA[/youtube]