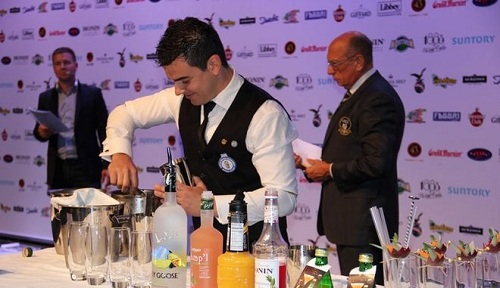 Greek barman Panagiotis Govatsos, won gold for making the best cocktail within the framework of the 39th World Cocktail Championship, sponsored by the International Bartenders’ Association.

The Greek winning entry, among 56 from throughout the world, was “Skyfall II“.

Speaking to ANA-MPA, Govatsos said that Skyfall II “captures all of natures’ aromas, from fruit and herbs to spices and fresh aromas.” Among others, he also stressed that his entry to the competition was chosen because it was “based on aromas and tastes that remind of Greece; its main ingredient is the hibiscus liqueur, which releases a fabulous aroma which, combined with the vodka I used, gives a balanced in taste, aromas and color.”

Despite the fact that he was born in California, therefore his family decided to relocate to Monemvasia, southern Peloponnese, where he currently lives and works. His career began at the age of 16 years old, when he used to work as waiter assistant so as to afterwards become a barman.

Govatsos was one of three representatives of the Greek Barmen’s Association. Except for his entry in the classic cocktail category, Constantine Frantzis also competed in Flairtending (freestyle), ranking 21st, and Panagiotis Pallis competed in the non-alcoholic category. The competition took place in Prague, in August.