Golden Dawn's No. 2 Jailed Too 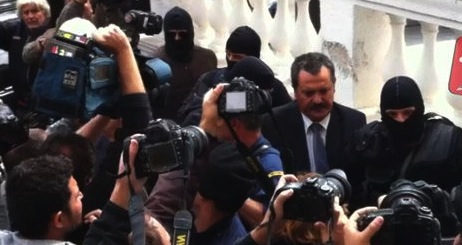 After appearing in court on Oct. 3, Christos Pappas, the second-in-command of the Greek neo-Nazi Golden Dawn party, was remanded in custody, joining his leader, Nikolaos Michaloliakos and another Member of Parliament, Yannis Lagos, who were being held in the women’s area of the Korydallos Prison in Athens.
Giorgos Patelis, head of Golden Dawn’s local office of Nikaia,  was transferred to Malandrino Prison in Volos. A policewoman assigned to Piraeus, who had been arrested, was taken to a prison in Thebes. They were among 32 suspects arrested in the last week facing an array of charges, including murder, extortion and money laundering.
The roundup came in the wake of the Sept. 17 murder of a 34-year-old anti-fascist hip-hop artist for which a man linked to Golden Dawn was arrested. Party leaders denied he had any affiliation with the group and said it was not involved in the killing, despite numerous eyewitness reports that Golden Dawn acolytes jumped the victim and his friends at a tavern.
It was reported that the suspects could wind up in the VIP wing of the prison where former defense minister Akis Tsochatzopoulos, who is being tried on corruption charges is being held, or to the wing where prisoners from the notorious terrorist group November 17 are incarcerated.
Three other Golden Dawn MP’s, including party spokesman Ilias Kasidiaris were released from pre-trial detention but barred from leaving the country and will have to appear later.