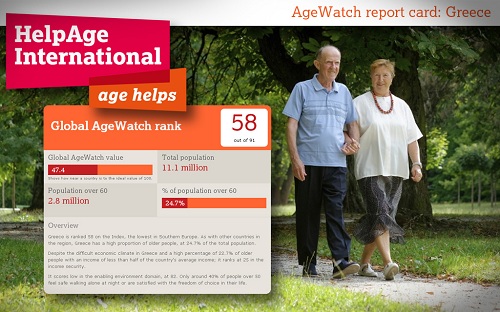 According to a new survey, on the occasion of the United Nations’ (UN) International Day of Older Persons, Greece ranks 58th in Global AgeWatch Rank on the Index, the lowest in Southern Europe. As with other countries in the region, Greece has a high proportion of older people, at 24.7% of the total population.
Despite the difficult economic climate in Greece and a high percentage of 22.7% of older people with an income of less than half of the country’s average income, it ranks 25th in income security.
It scores low in the enabling environment domain, at 82. Only around 40% over 50 feel safe walking alone at night or are satisfied with the freedom of choice in their life.
Among others, Albania ranks 39th and Cyprus 57th.
Once again the Scandinavians dominate a world ranking. Sweden was proclaimed the best country for the elderly, while in the top five we find Norway, Germany, the Netherlands and Canada, with the U.S. ranking 8th on the Index. On the other hand, at the bottom of the list we see Afghanistan, 91st, while neighboring Turkey ranks 70th.
For the survey, the Index took into account four specific factors that affect the quality of life of people over 60: income security – pension, health level, employment – education level and whether the broader social environment is favorable for their welfare.