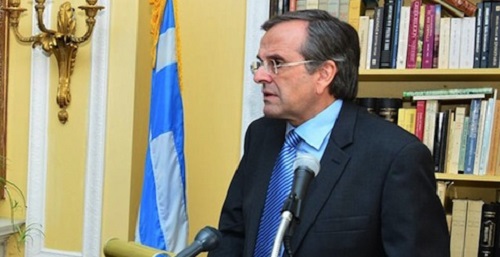 In a speech to the American Jewish Committee on Sept. 30, Greek Prime Minister Antonis Samaras, who directed the arrests of leaders and members of the neo-Nazi Golden Dawn party in the aftermath of the killing of an anti-fascist said its followers aren’t like them – at least to the extent of being fascists.

He said his government, comprised of his New Democracy Conservatives and the PASOK Socialists, would root out Golden Dawn and strangle them legally because they are a criminal gang. Golden Dawn has 18 seats in Parliament, but six of its MP’s, including leader Nikolaos Michaloliakos and spokesman Ilias Kasidiaris, were among those scooped up.

“The Golden Dawn case has taken the road of justice. We will do everything. Golden Dawn leaders have been arrested for criminal activities and they will be tried in a democratic way,” he said.

“I trust the Justice in Greece who correctly initiated and will finish with the best possible way the case,” he stressed. However, Samaras explained to his audience who applauded when it was mentioned that “the leader of the criminal organization Golden Dawn will face trial, “that it is the Greek Justice and the judicial system before it, not the government”.

The Greek Prime Minister also noted that Greece is a unique example regarding the arrests of Golden Dawn leadership despite the fact that other countries also have relevant problems with neo-Nazi organizations. More importantly, he explained to the members of the American Jewish Committee that the voters of Golden Dawn are not themselves neo-Nazis, only the leadership of the organization is.

“The voters are people struck by the economic crisis and the high unemployment rates in the country,” he said and expressed the certainty that the Greek people have political perception and they will isolate neo-Nazis. He didn’t say that his party and PASOK created the crisis by packing public payrolls with hundreds of thousands of needless workers for generations in return for votes.

Samaras described to the members of the powerful Jewish lobby the difficult situation of the country, as well as his optimism that Golden Dawn would be curbed and the economy, now in the sixth year of a recession with a record 27.9 percent unemployment, would start to recover next year although most analysts said it will take many years.

Finally, the American Jewish Committee, joking, gave him as a present the TV series Seinfeld, a sitcom that features five Jewish friends and which is particularly popular among the Jewish of America to watch when relaxing. They also gave him a commemorative papyrus which assures him that the Committee considers him a very good friend.