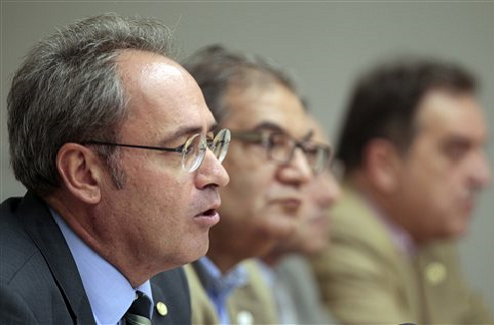 The administrative employees of Greek universities are entering the fourth week of mobilizations with a new five-day strike, while university professors announced a strike for October 1 and 2. The deans, in the press release they gave, stressed that they have taken care of freshmen enrollments with an extension of the enrollment period that will apply for all institutions.
“We propose to the Education Ministry to suspend the application of the Common Ministerial Decision in order for both parties to find a commonly acceptable scientific methodology for the evaluation process,” stressed the dean of AUTH and chairman of meeting of deans, G. Milopoulos. “Otherwise, this will be a tough winter for education,” he added.
Milopoulos also made known that the deans will file a notice of appeal including provisional and protective measures to  the Council of State. “But, can the problems of Education be solved in courts?” he wondered.
Here are the five questions that the deans pose to the Ministry of Education:
With which method and criteria was it decided that universities have excess employees?
On what grounds were the plans for the evaluation of universities rejected?
Based on which legislation did the ministry proceed unilaterally to such a decision?
Is the ministry aware of the problems that this measure of temporary lay-offs will cause to the universities and what does it intend to do to solve these problems?
Why did the ministry reject the only method of evaluation and absorption of funds, known as “Proposal 56”?
“We proceeded to a symbolic suspension of the operation of the universities. Our objective is however, for the universities to stay open,” underlined the dean of the Aristotelian University of Thessaloniki.