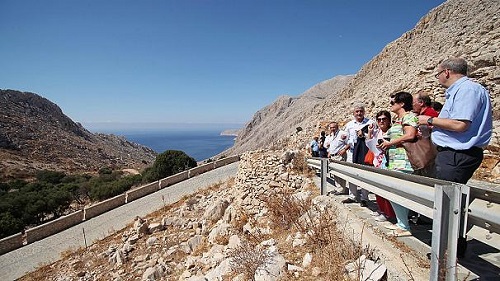 The challenges, problems and development prospects of the small Greek islands in a period of financial crisis, were the main issue of the visit paid by a group from the European Parliament in the South Aegean. The region, because of its geographical specificity is in need of the Structural Funds’ support, in order to achieve the goal of the convergence with the rest European regions.
The issue of the regular and affordable transport of the small border islands is fundamental to the survival of their residents and is a prerequisite for any development perspective.
Members of the Group of the European Socialists involved in the Committee for the Regional Development traveled to Rhodes, Tilos and Halki, on the initiative of the MEP Giorgos Stavrakakis, a PASOK Socialist.
The working group of the European Parliament, accompanied by the regional presidents of the South Aegean Yiannis Macheridis and PASOK MP of Chios, responsible for island policy issues,  Constantine Triantafyllos, informed the local authorities for the development of the consultation of the new long-term EU budget
The working group was guided to several constructions completed with the financing from the European Structural Funds and noted the problems of residents of the remote islands. During the period 2007-13, infrastructure projects that exceed 1 billion euros were co-funded by the program Crete and the Aegean Islands.
“Tilos is a model of development” said Stavrakakis. The island has managed to be at the top of the list of EU funds. Infrastructure projects have provided development  on the island. The number of the residents has increased to 829 in 2013 from 271 in 1991.