Samaras Back to U.S. On Investment Hunt 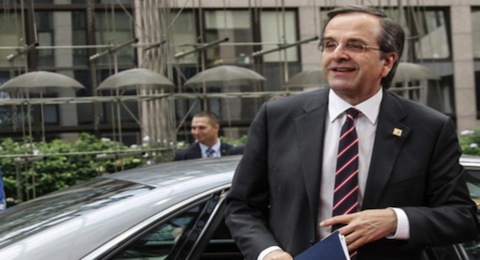 Greek Prime Minister Antonis Samaras, who was in the United States in August to meet President Barack Obama and business leaders in Washington and New York is going back on Sept. 28, this time to meet Vice-President Joe Biden and International Monetary Fund (IMF) chief Christine Lagarde, whose agency is one of Greece’s international lenders.
Before he goes, however, Samaras is scheduled to meet with envoys from the Troika of the European Union-IMF-European Central Bank who are in Athens checking the books for progress on long-delayed reforms before signing off on a continuation of more loans as part of a second bailout of $173 billion. Greece spent a first for $152 billion without making a dent in its debt or deficit.
Lagarde is scheduled to meet him on Oct. 1 and talk about the long delays in implementing some reforms while Samaras is expected to counter that the country is on track to have a primary surplus and could begin to recover and even return to the markets next year.
Samaras will talk with Biden, a supporter of Greek causes and will meet with representatives of the Greek American community, asking them to support the Greek economy and will attend the Liturgy and the St. Nicholas church which Archbishop of America Demetrios will officiate.
As part of his “investment safari” Samaras will attend a function organized by The Hellenic Initiative institution, which former US President Bill Clinton is expected attend. The Stavros Niarchos Foundation will be awarded for its support.
Samaras will then attend a function of the American Jewish Committee, where he will likely refer to the Greek government’s efforts to combat anti-Semitism and Nazism in relation to recent developments with Golden Dawn.
The Prime Minister is also expected to appear at a function organized by the Peterson Institute for International Economics, where he will meet American media moguls.
Upon his return to Athens, he will head to Israel on Oct. 7-8 for the first Supreme Council of Cooperation of the two countries to talk about issues of mutual importance in the Middle East and America’s role there.
Samaras and his Israeli counterpart Benjamin Netanyahu are expected to come to an agreement with Cyprus and sign a memorandum of cooperation regarding energy and maritime matters in the South East Mediterranean Sea, which the USA supports. The PM will also be accompanied by a group of investors in order to increase the degree of cooperation in finances between the two countries.