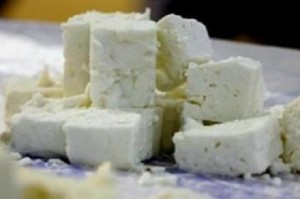 The General Secretary of Agricultural Policy and International Relations of the Ministry of Rural Development and Food, Dimitris Mellas, assures that Greece will impose a veto, if it’s needed, tot keep out of Europe any white cheeses bearing the name feta, which is Greek only, although Canada is trying to get around it.

In the meeting organized by the Pan-Hellenic  Confederation of Agricultural Cooperative Associations (PASEGES) at Thessaloniki for the CAP reform  during the period 2014-2020, Melas  makes clear that, “We must remove from the rhetoric of any public discourse that it’s possible to enter in the EU  feta produced in Canada.”

He said that it’s “at least stupid to believe that the EU will break the most fundamental pillar of copyright and trade, since Europe’s Competitive advantage is the quality of the products, expressed in its trademark symbols.”

The top priority of the Ministry of Rural Development and Food, referring to the proposal under development, is to remove inequities or imbalances supports. The new CAP aims to produce the used land. So, it removes past inequities, where the allocation made to farmers who didn’t have an important role in the production process.

Also, he mentioned as priorities the sustainable development of farms, mitigation of climate change, sufficiency of products, increase of country’s’ exports and then reduce the negative balance. The fundamental aim  is the creation of pledges to use every euro effectively given through the common agricultural program, he said.