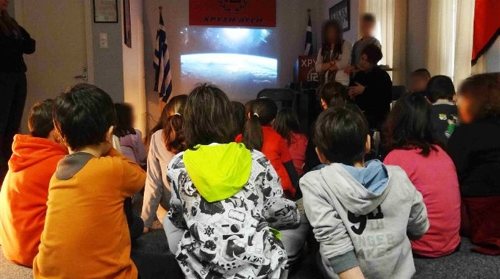 It seems that the Greek neo-Nazi Golden Dawn party has invaded Greek schools, as it is attempting to recruit young students, while several teachers talk about groups of out-of-school individuals who try to recruit minor boys and girls in order to staff the organization’s hit squads.

The situation at schools seems to be out of control, as teachers reveal that they are receiving threats by older students, who even want to have higher grades, as reported in the Greek newspaper To Ethnos.
The students that are recruited by the neo-Nazi party usually target foreign or anti-fascist classmates of theirs and in many cases beat them up. For example, a student at a Lyceum in Rethymno, on the island of Crete, was attacked and beaten up by his classmates who are supporters of Golden Dawn, because he went to an anti-fascist rally, while the teachers’ intervention was necessary to put an end to the beating.
Golden Dawn members usually choose children from lower social classes, who manifest an aggressive attitude and brainwash them, telling them that they can become masters of the school, while they use as an example Golden Dawn MP’s and major officials who are well-known for their activity.
Golden Dawn members have the best chances to recruit minor students when their parents are unemployed, because they can easily turn them against immigrants.
The way that Golden Dawn members prefer to recruit students is by distributing leaflets outside schools or through the  social media frequently used by students, such as Facebook.
Teachers on their side, are afraid to denounce certain incidents, because they are afraid of reprisals, while there are individual cases of teachers who support Golden Dawn.