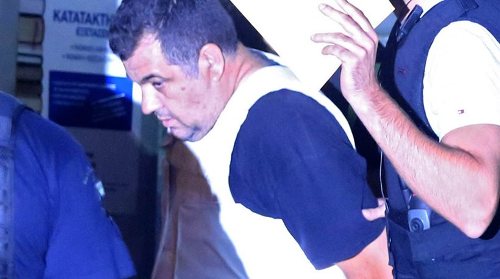 Giorgos Roupakias, the 45-year-old member of the Golden Dawn neo-Nazi party who is charged with killing 34-year-old hop artist Pavlos Fyssas in Keratsini on Sept. 17, was expected to be transferred to Malandrino Prison in central Greece on Sept. 25 after officials at Athens’ maximum security Korydallos Prison, citing fears he would be at risk, refused to take him.
Roupakias had been in custody at police headquarters in Athens while officials tried to figure out where to put him. The killing of Fyssas sparked a night of rage against Golden Dawn and prison officials feared he would be a target as the party is also known as viciously anti-immigrant and has a long hit of list of perceived enemies.
At least five more members of Golden Dawn were expected to be charged in connection with the fatal stabbing of Fyssas who was attacked as he left a cafe in the neigborhood of Amfiali, where he had been watching a soccer game with a group of friends.
According to sources, the police have identified people who communicated with Roupakias prior to the attack after inspecting his mobile phones records.
Meanwhile, an anti-fascist rally was expected to take place on Syntagma Square in central Athens late on Sept. 25. The killing has begun to unravel the inner workings of Golden Dawn with the government investigating whether its members are getting training from the police and military.