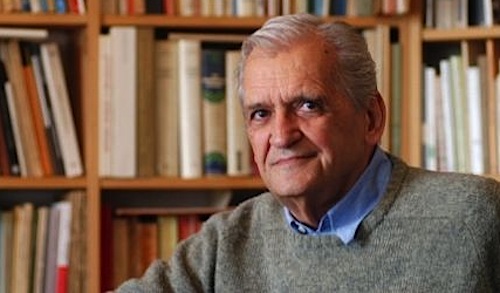 Titos Patrikios, one of the most renowned poets of contemporary Europe and Greece, has suffered prison sentences, violence and exile for his political and intellectual activism. Born in 1928, the poet will be receiving the prestigious international Lerici Pea award on September 28 for his extraordinary career as a poet, as well as a translator of the works of important international poets into Greek.
He is also the founder of Epitheorisi Technis (‘The Art Magazine’). Two main themes run through all of his works: memory and political and civil commitment. ”I have been through many phases in my poetry,” Patrikios told ANSAmed in an interview. ”As a young man I was interested in describing my feelings, while later I focused on the resistance struggle against the occupation and then on the struggle for social rights. Creating poetry on this basis is difficult and a great deal of discipline is required.
Memory instead serves to look at the present through different eyes, and not the past.” On the issue of memory, ANSAmed asked the poet what he thought of the recent resurgence of Neo-Nazi violence in Greece.
”I’ll quote Hegel. ‘The only thing that history teaches us is that it doesn’t teach us anything’,” he said. ”Europe doesn’t learn. These trends are repulsive to me.
I revolt against them, but also try to explain them. Difficult times often lead to the emergence of forms of totalitarianism, which bring with them a sense of unification, of an elimination of differences – look at Mussolini, Hitler and Stalin. People need to feel united. But solitude is necessary for thought; it serves to reconsider ourselves and the world.” Patrikios was in exile in Italy during the Greek military junta of 1967-74, and admits to a ‘love affair’ with the country.
”I have to come at least once a year: Italy is my opium.
Yes, it’s also because of its art, but for me your country is especially its people, my close and long-lasting friendships with many who are unfortunately no longer among us.
And then there is also a matter connected with my family – which wouldn’t be here today if it weren’t for an Italian military officer.”
”In 1943 Athens was under the Italian occupation. My father, an actor and head of the actors association, called a strike of the city’s theatres – which came as a shock, as there were many theatres in those days. One day during the strike, a certain Lieutenant Gallo knocked at our door.
He asked to speak to my father, and the two of them went into his study. We were worried, and my father told my mother to pack him a suitcase.
That officer, an anti-fascist, had warned my father that he would be arrested that evening.
He saved my father: when they came to arrest him, my father had already left. We tried to track him down after the war, but we found out that after September 8 he had joined the partisans in Yugoslavia, and that he had lost his life in battle. This is my bond with Italy.”
Titos Patrikios, born in Athens in 1928, is the ‘godfather’ of contemporary Greek poetry, as can be seen in the Les Poètes de la Méditerranée anthology published by Gallimard. Patrikios, heir to an illustrious tradition running from Kavafis to Sferis, from Elitis to Ritsos, is a master of both in lyrical and civil poetry. After being deported by the military junta, he lived in exile in Paris and Rome before returning to his native Athens, where he currently resides.
Through his life story and his works, Titos Patrikios proves how commitment to civil rights can be combined with powerful lyrical poetry, and the Lerici Pea award is meant as recognition of his important place in contemporary European poetry.
(source: ANSA)