One of the World's Largest Cruise Ships Moored in Thessaloniki 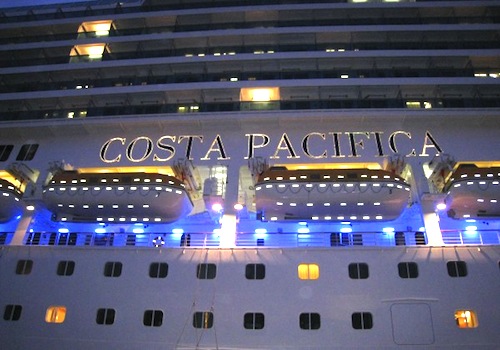 The spectacular cruise ship, Costa Pacifica, carries 3,800 tourists – It arrived from Istanbul on September 23 and ever since has caught the eyes of the residents of Thessaloniki…
Costa Pacifica arrived at Thessaloniki port at 08.00 a.m. from Istanbul and will depart at 6 p.m. for Volos. Most passengers are Europeans, who have already got a first taste of  the city. That is why 20 buses were at the port from early on, in order to guide tourists through the “Bride of  the Thermaic.”
Costa Pacifica carries 3,800 passengers. It should be recalled that a cruise ship of a similar size, hasn’t come to the port of Thessaloniki for years, after the eventful departure of the colossal cruise ship, Navigator of the Seas of the Royal Caribbean cruises.
At that time, only half of the 3,500 passengers of the cruise ship visited Thessaloniki, in order to avoid the extensive bureaucracy, a problem caused by the employees of the Port Organization. In the case of Costa Pacifica, things have been running smoothly.
“We hope that everything runs smoothly and that we won’t fail again, as cruises in Thessaloniki are worse every year and if we don’t help, it is possible that it will erase,” Vikos Palantzian the shipping agent, remarked, calling those responsible at the port to be rather fast and helpful, so that the cruise ship “sails back to us.”