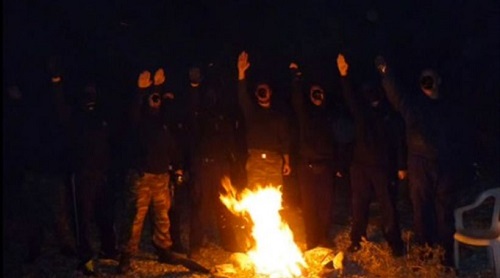 According to photographic documents, the paramilitary groups of the Golden Dawn extreme far-right party are being objected to tough tests.
According to the Ethnos news report, young men dressed in camouflage uniforms, hooded full face and military knives in their belts salute in a Nazi way holding the Greek flag, and run half-naked in the cold and darkness. These men are being taught the doctrine of hate in special exercises by the head of the organization.
The photos were published by members of the local Golden Dawn organization in the area of Nikaia, Athens, and the paramilitary exercises had taken place on an island located in the Argosaronic Gulf, in December 2011, before the Greek elections.
The military exercises take place at night and the GD members are being prepared for any threat.
The revelation of the criminal activities of the Golden Dawn hit squads has shocked the public opinion and has raised concern to the Government and the leadership of the Greek Police.