Policeman Fires in Air During Protest 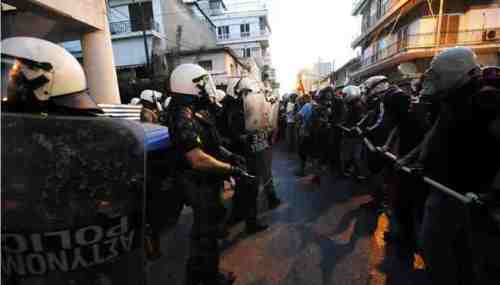 On September 20, during an anti-fascist protest that took place in Dafni, a suburb of Athens, for the killing of the anti-fascist hip-hop artist, Pavlos Fyssas, by the supporter of Golden Dawn, Giorgos Roupakias, a police special guard who was off duty pulled his service gun and shot in the air.

The policeman claimed that he was suddenly surrounded by 30 individuals, who threw him off his motorbike and damaged it. According to his version, in his attempt to avoid the crowd, he escaped to a nearby cafeteria and shot three times in the air in self-defense.
However, eyewitnesses presented another version of the incident. They said the policeman stopped with his motorbike in front of the protesters that were gathered there, shot in the air and then hid in a cafeteria.
Clashes followed for a long time between the police and the demonstrators and  there was use of tear gas. The policemen released the special guard from the cafeteria and led him to the General Police Directorate of Attica, to explain his  behavior and the incident.