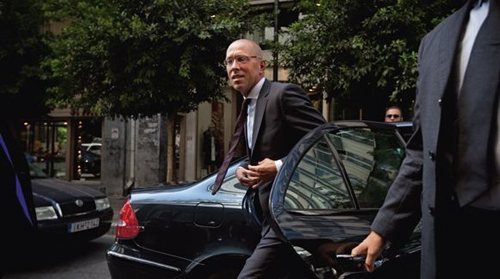 German newspaper Die Zeit has cited an article claiming that Deputy Prime Minister Evangelos Venizelos asked European Central Bank executive board member Joerg Asmussen to “reorganize” figures in order for Greece’s fiscal gap for 2015 and 2016 to appear smaller than it is.

The article is written by Mark Ciric and Jana Simon, makes the public sceptical when referring to Asmussen’s visit to Maximos Mansion and his meeting with Mr. Venizelos, where writers claim that PASOK chairman asked Asmoussen to “reorganize” the deficit figures.
“During his trip to Athens, Asmousen met the Deputy Prime Minister as well. They discussed about the budget deficit, though Asmousen could not believe what he was asked to do! Greek Deputy Prime Minister asked him to “reorganize the figures” so that the deficit appears smaller.

Die Zeit reporter, Jana Simon, describes how the ECB official was shocked by Venizelos’s request.
“For Asmussen, these words characterize the old Greece and outdated, inefficient systems for which he fundamentally has no understanding,” the newspaper reported.
Market News International later quoted a spokesman from the ECB as saying “the article is not correct on that point, but we will not discuss details of internal talks.”