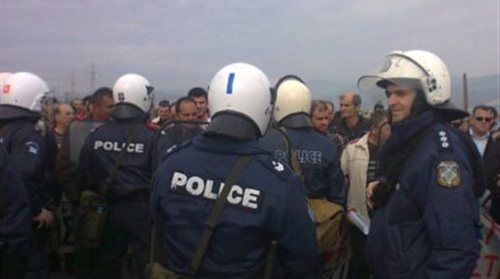 The rally of the Larco General Mining and Metallurgical Company workers ended with seven arrests and three injured protesters. The protest took place at the interchange of Martino on the National Road Athens –Lamia, when there were clashes between the riot police and the protesters.
The workers’ rally was in process and there was a few-minute disruption of the traffic in order for the MP’s and the trade unionists to give their speeches, when some of the protesters attempted to block both sides of the road breaking the cordon put up by the police, who responded with chemicals and flash- bang grenades.
The standoff lasted 15 minutes and ended with stone throwing . Three protesters were injured and taken to Larco’s treatment room.
Both roads of the highway were freed up shortly before 2 p.m., but the atmosphere in the region remained tense for a long time.
According to information, a meeting has been organized for tonight, where except for the employees, residents of the villages around the factory are also invited to participate.