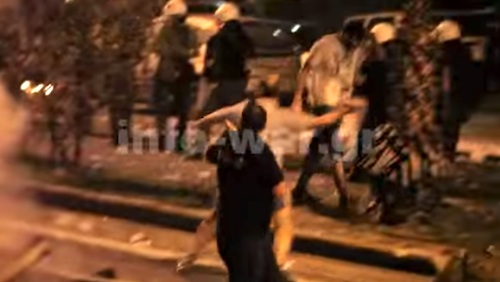 One of the videos posted on the Internet, this one on Youtube, about the night of violence on Sept. 18 in Greece as protests raged against the neo-Nazi Golden Dawn party after one of its members was arrested on charges of murdering an anti-fascist purports to show that police and plainclothes officers – identified as “thugs” – are attacking demonstrators.
There’s no evidence of that in the video, apart from a row of police standing by, while a small gaggle of men are hurling rocks at some targets off the screen and screaming epithets, with one of them holding a video camera to capture the action. The police have been accused before of planting officers in street clothes in the ranks of protests to agitate the crowd.
The video doesn’t identify where the action was taking place as there was a spate of protests across Athens as well as in the country’s second-largest city, Thessaloniki, and the major western port city of Patras.
Whatever happened, it was a night of chaos around the area of the protests with wild scenes in Keratsini, near Piraeaus and the site of the murder, especially erupting with crowds trying to attack the police station in the neighborhood.
[youtube]fH9CLuJNmtE[/youtube]