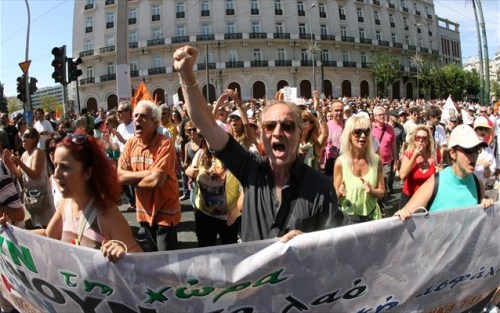 The big rally that took place on September 18 at Syntagma in Athens, Greece, by the Civil Servants’ Union, ADEDY, where numerous protesters had gathered against the plan to suspend and fire public workers, was converted into an anti-fascist protest.

The murder of the 34-year-old Pavlos Fyssas, an anti-fascist and hip-hop artist, a little after midnight in Keratsini, by a member of the neo-Nazi party, Golden Dawn, gave a different character to the rally.
ADEDY’s gathering, which was held in the framework of the 48-hour strike declared by the highest trade union of civil servants, began from Klafthmonos square and went through Stadiou street, Athens’ major street linking the squares of Omonoia and Syntagma.
The teachers’ road block, which was crowded, had a very strong presence. According to first estimates, a number of more than 10,000 protesters participated.
There was tension earlier outside the Greek Parliament, when hooded individuals threw bottles and tomatoes at the riot police, who did not answer back.
The General Confederation of Greek Workers, GSEE, participated in the rally with a four-hour work stoppage from 11.00 a.m. until 03.00 .pm.