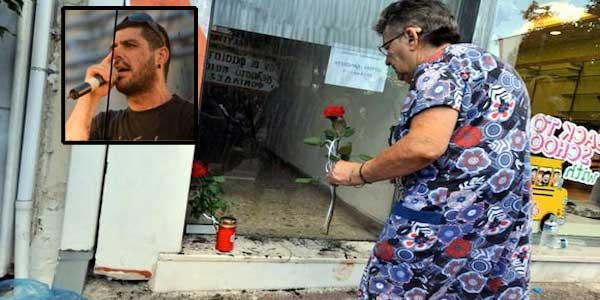 Greek police are investigating the stabbing death of a 34-year-old hip-hop artist that leftist groups said was killed by a gang of neo-Nazi Golden Dawn members who critics say travel in packs to assault immigrants and their perceived foes.

There are contradicting reports as to what happened to lead to the murder of Pavlos Fyssas, an anti-fascist who died early on Sept. 18 after a confrontation said to have been started by an argument at a cafe over a soccer match between Olympiakos and Paris St. Germain.
Police said they had arrested a 45-year-old Golden Dawn member for the killing but didn’t reveal his name. They raided Golden Dawn’s offices later in the morning and said the suspect confessed to the killing and being a member of the neo-Nazis but then a later report said the suspect asked his wife to toss out his party membership card, which authorities said they found in a garbage bin at his house.
Golden Dawn immediately denied any connection, but the incident inflamed tension just as a 48-hour general strike was underway by labor unions angry over austerity measures and the coming of scores of thousands of public workers.
Police said the suspect left the cafe but returned and attacked the victim with a gang, overwhelming him.
It was reported he told them the name of his attacker before losing consciousness while being taken to the hospital where he died shortly thereafter. Fyssas had been part of the Greek hip-hop scene since 1997 and performed under the name Killah P.
Speaking on SKAI radio, Keratsini Mayor Loukas Tzannis also said the death was started by an altercation at the cafe and that witnesses identified the gang as Golden Dawn members. Tzannis also said that Fyssas’s attackers were members of the far right.
The anti-capitalist party ANTARSYA and the Communist Party condemned the incident, blaming Golden Dawn for the victim’s death and claiming that Fyssas was targeted because of his anti-fascists activity.
Petros Constantinou, a spokesman for ANTARSYA, alleged that there had been no quarreling prior to the incident, but that a group of anti-fascists were attacked by about 40 members of Golden Dawn outside the cafe.
He also claimed on SKAI radio that the attack occurred in the presence of Dias police units who watched and did nothing. Golden Dawn is believed to have links to the police and with many sympathizers in law enforcement.
Police raided the offices of Greece’s far-right Golden Dawn party Wednesday following a fatal stabbing by a man who authorities said admitted being involved in the party, the most serious instance of violence attributed to the extremist group.
Golden Dawn MP Ilias Kasidiaris, whose parliamentary immunity has been stripped so he can be tried on criminal charges, denied his party’s involvement in the incident and said that the party would respond with lawsuits. He told SKAI that there were no political motives behind the attack and that opponents were unjustly accusing the party of creating “a climate of polarization and war”.
The party, whose senior members have expressed admiration for Adolf Hitler although they deny being a neo-Nazi group, won nearly 7 percent of the vote in general elections last year. Support has since risen to around 12 percent according to recent opinion polls.
Golden Dawn members and supporters, often clearly identifiable in black T-shirts and combat trousers, have been blamed for numerous violent attacks, mostly against dark-skinned migrants, in cities across the country.
There have also been clashes and fights between suspected party members and anti-fascist or left-wing group supporters. Although injuries have been caused in the past, they have not been fatal until now.
“I am shaken by the event,” said Public Order Minister Nikos Dendias. He said the killing and recent violent incidents involving the party, along with name-calling in Parliament, “shows in the clearest possible way the intentions of the neo-Nazi creation.”
Earlier, before police announced that the suspect had identified himself as being in the party, Kasidiaris described the stabbing as a “heinous crime” and denied any party involvement. Later, party lawmaker Michalis Avranitis said the victim and the suspect had initially had an argument about a soccer match that was playing on TV in the cafe.
The attacker then apparently left the cafe, returning later and stabbing Fyssas. “Yes, this man, as it turns out, has declared himself to be a member of Golden Dawn. But Golden Dawn has 1 million supporters. If in a restaurant, two drunken idiots have a fight and someone is stabbed, should we look at their ideology and blame that?” Avranitis said.
Witnesses at the cafe told Greek media that the attacker had left and later returned with a group of other men, whom they considered to be Golden Dawn supporters from the way they were dressed.
“We call on all political forces to raise a barrier to the vicious cycle of tension and violence,” said government spokesman Simos Kedikoglou. “Democracy needs stability, cohesion and responsibility from all.”