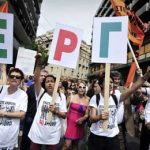 Destined to lose, Greek high school teachers nonetheless won the first round of a seemingly fruitless battle to convince the government to reverse course on a plan to transfer or fire scores of thousands of public workers by staying off the job for a second day on Sept. 17 as part of a five-day rolling strike that is getting larger with other sectors joining in.
Administrative Reform Minister Kyriakos Mitsotakis, who is implementing the so-called mobility scheme without evaluating people as he promised before they will be let go, had vowed that teachers wouldn’t strike for even a single day without being forced back to work but they ignored him.
Prime Minister Antonis Samaras hasn’t said whether he, as he did with striking metro and port workers, issue a civil mobilization order to force their return under the threat of arrest or being fired, although it would be cumbersome with thousands of teachers already defying the government’s demand they not strike.
Elementary teachers are expected to join as part of a two-day general strike for Sept. 18-19 called by the public workers union ADEDY and municipal garbage collectors, doctors at public hospitals and lawyers will also take part in protest at a government scheme to cut the size and cost of the Greek civil service as well as to open so-called closed shop professions and end their monopolies and fixed profit rates.
Hospital doctors will be on strike for three days, while municipal sanitation workers will not be collecting garbage off the streets of the country for two days, through Sept. 18. Lawyers, who are protesting the liberalization of their sector, will not make court appearances even though for many their business has been drying up fast during a crushing economic crisis which has seen many people put off actions such as divorces.
Train and Proastiakos suburban railway workers will be walking off the job for four hours on Sept. 18 in protest at plans to privatize the Hellenic Railways’ Organization (OSE.) The stoppage will take place from 11 a.m. to 3 p.m. and will mean serious service disruptions.
The Secondary school teachers protest had a surprisingly large participation of some 90 percent, more than three times that expected by their union OLME. School guards, university staff and other public sector employees joined the action too.
The government said 60-80 percent of high school teachers stayed off the job and is banking on the them fearing continued loss of pay as they will not get their salaries for strike days. Kathimerini said it was told by sources that OLME has decided on the creation of a “strike fund,” the proceeds of which will go toward supporting protesting teachers.
Equally worrying for the government is that 10 schools had been occupied by students amid fears it could create momentum for more to be taken over. That’s an annual occurrence but this time the major opposition party Coalition of the Radical Left (SYRIZA) has asked students to show sympathy for the teachers and back the strike.
A protest rally by teachers in the center of Athens on Sept. 16 concluded peacefully. Earlier in the day, though, school guards, who are also protesting a civil service mobility scheme involving transfers and dismissals clashed with riot police outside the Administrative Reform Ministry. Five of the demonstrators were taken to the hospital with breathing problems but no injuries were reported.
The government said it has no alternative because the firings and involuntary transfers were demanded by international lenders in return for bailout loans keeping the economy from collapsing.