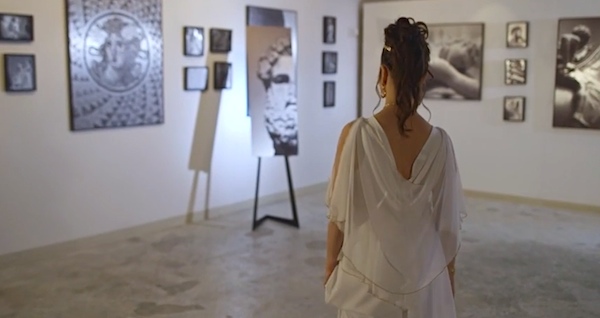 The photo exhibition “Seeking ancient kallos” (beauty) by American photographer Joshua Garrick opened on September 12 at The National Archaeological Museum in Athens. The exhibit runs until January 8, 2014.
The title of the exhibition marks his desire to seek the core of classical beauty, captured on ancient sculptures which he has been photographing for the last decades in Greek Museums. In this exhibition, Garrick’s works are black and white photographs printed on aluminum DiBond, which highlight often unseen details of illustrious Greek treasures including some of the most famous sculptures of history, exhibited in the National Archaeological Museum.
In his own words, “My love of all-things-Greek comes from the fact that what we most treasure in Western Civilization – our legacy of art, history, theatre, philosophy, and government – ALL comes from that singular place and time in history. Out of respect for those geniuses who lived in Athens 2,500 years ago, I feel a ‘religious responsibility’ when I photograph their ancient statues and monuments. At this moment in history, it is more important than ever for all of us to understand the real ‘wealth’ of Greece – the inestimable ‘wealth’ of Greece is located within the walls of the National Archaeological Museum, which celebrates that ancient genius.”
Fine art photographer, curator and lecturer Joshua Garrick became an admirer of Ancient Greece and its history at a young age. With a Master of Fine Arts degree from Columbia University in New York, Garrick’s life has been dedicated to capturing Greece’s treasures through his skilled photography, with permissions from the Greek government for access to that country’s famed monuments and museums. His passion for Greece has resulted in a partnership with the country’s most-regarded museum, the National Archaeological Museum.
The curator of the exhibition is the art historian, Iris Kritikou and the designers are the artists Marios Voutsinas and Anastasia Dalma.
The exhibition is composed of four thematic units, placed in different areas of the Museum:
“Visit”/ A visit in the Museum’s monumental vestibule: three photos, aiming to initiate the visitor to the artist’s dialogue with the sculptures,
“Breathing”/in Gallery 21: one photo that in a way reveals the hidden side of an exquisite female statue,
“Garden statues”/ in the Atrium: an extraordinary selection of statues depicting the ancient Greek beauty,
“Instants”/ in the Inner Cafe: a series of photos presenting details of the sculptures as captured by the artist.
The final result is a mental wandering, aiming to delight the visitor and to highlight the unseen sights in each sculpture. The inspired titles by the artist further emphasize this wandering, as they refer to life and death, youth and maturity, power and prudence, beauty and pain, joy and loss, victory and defeat, love and immortality.
Watch the video showing the thought processes that go into the creation of Josh Garrick’s Images: