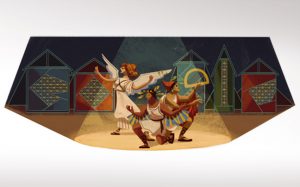 Google honors Karolos Koun, a great Greek theater professor and director, founder of the experimental Art Theater, with the doodle of Sept 13, 150 years after his birthday.
Karolos Koun was born in Bursa, in northwestern Anatolia, on September 13, 1908. When he was only six years old, his parents moved to Istanbul where he stayed for the next 20 years.
Koun is mostly known for his lively staging of ancient Greek plays. He had been praised all over Europe for his bawdy, colorful stagings of the 5th century BC political comedies of Aristophanes.
In 1942, he founded the experimental Art Theater and its drama school.
Koun gave premieres in Athens of works by avant-garde European playwrights, such as Bertolt Brecht and Luigi Pirandello. In 1962, Koun’s production of The Birds by Aristophanes won first prize at an international festival in Paris.
He worked with famed actress Melina Mercouri. She played Blanche Dubois in A Streetcar Named Desire which was staged by Koun’s Art Theater. Other playwrights that Koun introduced to Greek audiences include Jean Genet, F. G. Lorca and Eugène Ionesco.
Karolos Koun died at the age of 78, on 14 February 1987, after suffering a heart attack.