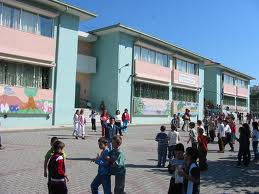 With Greek high school teachers set to begin five-day rolling strikes on Sept. 16 – elementary school teachers have decided to stay on the job – students are finding themselves being used by the government and opposition.
Prime Minister Antonis Samaras’ administration is conducting a so-called mobility scheme in which as many as 40,000 public workers could be transferred or fired over the next two years, including teachers.
Major opposition leader Alexis Tsipras of the Coalition of the Radical Left (SYRIZA) announced from the 1st Vocational High School of Nea Ionia that “nothing is free in life” and that “everything is claimed with a struggle,” urging parents and students to join and support the upcoming teacher strikes.
The President of the teachers federation OLME Themis Kotsifakis called for popular support for the “long struggle.” Government spokesman Simos Kedikoglou said Tsipras was acting like “the president of an old-time student council,” while the Minister of Education Konstantinos Arvanitopoulos appealed the teachers to reconsider, so that “the students do not pay the financial crisis.”
He said this would be the last year of hardship under austerity measures except for people who will be fired and put into a job market of a record 27.9 percent with 1.4 million people looking for work.
Teacher union officials met with Deputy Prime Minister Evangelos Venizelos, the PASOK Socialist leader, who said he would support some teacher demands but that the school year can’t be interrupted. He didn’t say what he would do inasmuch as he supports the scheme to transfer or fire them.
Union officials said there were 5,246 gaps in primary education and about 5,500 teachers are being held “hostage” due to their upcoming transfers. He said teacher wages have been cut a much as 40 percent with starting salaries now between 640-700 euros ($850-$930) before taxes as the government has eliminated tax-free brackets and is taxing everyone except tax evaders.