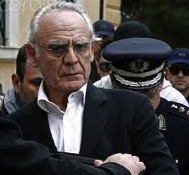 Former defense minister Akis Tsochatzopoulos, accused of stealing so much money from defense contracts that he couldn’t keep track of it, should get a life sentence if convicted of money laundering and corruption charges, the prosecution has urged.
Lawyers for the state said Tsochatzopoulos cheated his country out of unknown millions of euros without caring how much it affected his fellow Greeks or the government and lived a lavish lifestyle far beyond his means and set up a scheme to cover his tracks while displaying utter contempt for the Greek people.
“He took so many kickbacks that even he didn’t know how much,” chief public prosecutor Georgia Adeilini told the Athens Appeals Court hearing the trial of Tsochatzopoulos and another 18 co-defendants, including his wife Viki Stamati.
The ex-minister showed “arrogance and contempt” for Greece’s institutions and people, Adeilini said, adding that the evidence against the former PASOK Socialist stalwart was “overwhelming.” A second criminal prosecutor, Panayiotis Panayiotopoulos, described Tsochatzopoulos as a “white-collar criminal” who deserved to go to prison for life.
The prosecutors called for 17 of the 19 defendants, including Tsochatzopoulos’s wife and daughter, to be convicted. They conceded, however, that only a fraction of the kickbacks had been traced by authorities. “Who knows in what secret places those millions of euros are hidden?” Panayiotopoulos said.
Earlier reports indicated he may have stolen a billion euros  and that his unfettered greed drove up the price of contracts, passing the cost on to the taxpayers while he lived in a mansion under the Acropolis and his wife spent wildly on luxury items, which the prosecution said ultimately was paid for the people.
Defense lawyers – a total of 53 represent the 19 defendants – are to take over on Sept. 13 or Sept. 16. A verdict is due in early October.
Panayiotopoulos explained that “Akis Tsochatzopoulos committed hubris, acted in an arrogant and insulting manner against all of society and its laws, as well as the divine law that sets limits to human action. He created a massive injustice”.
He was particularly critical of Tsochatzopoulos’ persistence on claiming to be persecuted on a political level, by reminding him that he “committed a shameful crime against the Greek people”.
One of the key witnesses was Tsochatzopoulos’ cousin Nikos Zigras who called on him to confess and issued damning testimony against him. Despite his cooperation, the prosecution said Zigras enjoyed the benefits of the money laundering and bribes, having bought apartments, paid off a costly divorce and lived a life of luxury. The prosecution has accepted  Zigras’ claims and suggest he be acquitted.
Accountant Frosso Lampropoulou was found to have “a significant” role in the money laundering and enjoyed the “absolute trust” of the former Minister. The prosecution stated that “there is no doubt that she covered his activities and knew very well where the money came from”.
Regarding Tsochatzopoulos’ former wife Gudrun, Adilini asserted that she and her family received suspicious funds without any concern, indicating passive bribery. The prosecutor also focused on the 400,000 euros from her divorce, transactions involving her sister Elge and her long-term cohabitation as proof of her knowing the source of the money.
The prosecutor said regarding those implicated in the Nobilis offshore company, Nikolaos Georgoulakis acted as Tsochatzopoulos’ “straw man”.