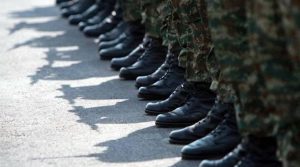 The financial crisis that Greece is facing has had a negative impact on the Hellenic Army as well, where the situation is dramatic. Recruits are those who are chiefly affected, as apart from the psychological impact of being recruited, they also have to face food and clothing shortages.
The cuts have led army units to give exit permits to recruits before the oath of allegiance in order to limit the costs of rations, while shortages in military clothing and footwear items are increasingly growing.
In training centers, no flip flops were given to soldiers during the summer, as it was recorded, while there is a great delay in ordering-delivery of jackets and sweaters, a fact that causes  concern in view of the winter.
According to Greek media reports, recruits are given an exit permit for the whole weekend, which has not been confirmed by the Hellenic Army General Staff. The staff officers do whatever possible in order to save even a little of the rations.
As far as clothing is concerned, the situation is worse. There are cases where no jackets and sweaters have been given as they were not available, while flip flops have finished since May.
Military sources say that the problems will be solved soon and that the required material will be distributed. The delays are attributed to the competitions conducted by the Ministry of Development.

Omicron Variant Spreads Throughout the World; Five Quarantined in Greece