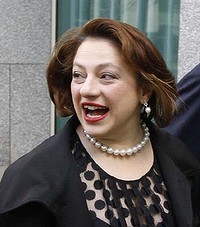 The counting of the votes in the regional Division of Indi in Victoria has turned into a thriller as the Greek-Australian deputy Sophie Panopoulos- Mirabella, who held the division for 12 years is threatened with defeat.

A defeat which will be the biggest surprise of the elections, as Mirabella had the seat with a 9 percent difference and was expected to win quite easily and to be re- appointed as the Shadow Minister for Innovation, Industry, Science and Research.

The new Prime Minister of Australia and Leader of the Liberal Party Tony Abbott waits for the counting of the votes to be completed in order to see whether Mirabella will keep her seat and give her the Ministry before he announces the composition of his government.

The prospects of the Greek-Australian deputy are not good. On Sept. 11 “1,000 forgotten votes” were found. These votes were counted but “by mistake” they were not recorded in favor of the independent candidate Cathy McGowan, who precedes Mirabella.

This resulted in increasing the difference between the two. Mc Gowan has the lead with 490 votes and the 1,000 will also be added, so the difference will reach 1,490. However, there are 8,000 more votes left to be counted and Mirabella still has an outside chance to win.

According to the Australian Electoral Commission, ten days more may be needed until the situation becomes clear. In  that case the Greek-Australian politician will surely stay out of the new governmental composition if not out of the Parliament.