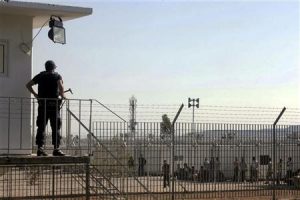 According to a decision issued by the Ministry of Public Order and Citizen Protection, the management of six temporary detention centers, where undocumented immigrants have been led to, will soon be put out to tender and private security firm companies which have been asked by the ministry to make offers, according to Greek media reports.
The migrant center in the city of Drama in northern Greece is included in the decision along with that in Corinth, southwest of Athens. The Amygdaleza facility is not included as it is located on premises that belong to the Greek Police (ELAS).
Minister Nikos Dendias said it would soon acquire “a permanent force and will not take up the time of police officers,” adding that until now he has received a lot of complaints by local police officers saying that the special needs for protection at the centers have burdened police departments, often leaving them unable to meet their daily duties.