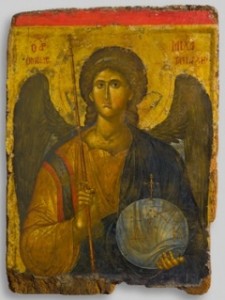 The art exhibition Heaven and Earth: Art of Byzantium from Greek Collections that will take place at the National Gallery of Art, Washington, from October 6, 2013, through March 2, 2014, is considered to be one of the most important cultural events in the capital of the United States.

The exhibition includes around 170 rare and important works, deriving exclusively from Greek collections that will offer a fascinating and revealing glimpse of the mysterious Byzantine Empire.

The exhibition is organized in cooperation with the Greek Ministry of Culture and Sports, the Benaki Museum, the J. Paul Getty Museum in Los Angeles, where the exhibition will also be presented from April to August 2014.

According to its organizers, the exhibition includes mosaics, icons, manuscripts, jewelry and ceramics, revealing the rich and multilateral Byzantine civilization. These works are drawn from public and private collections in Greece, as well as from recent excavation findings of the period from 330 to 1453 AD.

The exhibition will include approximately 170 works of art presented in five thematic sections:

From the Ancient to the Byzantine World

The Pleasures of Life

The director of the National Gallery of Art, Earl A. Powell, recently stated that this is the first time that byzantine works will be presented at the Gallery, underlining that the upcoming exhibition is excepted to attract a big number of visitors.