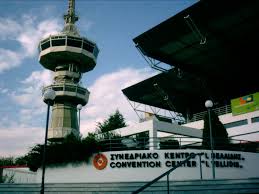 September has always been the brightest month for the city of Thessaloniki. The International Trade Fair that takes place in the city has always been  hosting political figures and state officials who visit Thessaloniki for political and cultural purposes.
The Thessaloniki International Trade Fair (DETH)) is an annual commercial exhibition, an event of great significance for Greece and Southeastern Europe which takes place at the 180,000m² Thessaloniki International Exhibition Center. The fair was first held in 1926 and today it is organized by HELEXPO.
It has been customary for the country’s Prime Minister to set out his government’s policies for each coming year in a speech at the annual Thessaloniki International Trade Fair, and for this reason the event has political significance in addition to its commercial importance.
The first Greek Prime Minister to attend the opening of DETH was Eleftherios Venizelos in 1928, though the protocol of all these years until 2011 has been inspired by Costantinos Karamanlis.
It is customary every year at the opening night of the Thessaloniki International Trade Fair for the Prime Minister of Greece to announce his administration’s policies on a number of issues, such as the economy. During the first months of the 2010 Greek debt crisis, the entire cabinet of Greece met in Thessaloniki to discuss the country’s future.
It is noteworthy that the Prime Ministers of Greece have made harsh statements in DETH. In 1995, when the then Prime Minister of Greece Andreas Papandreou was questioned if he was satisfied by the policy of the then Minister of Industry, Costas Simitis, Papandreou answered “No, I am not satisfied.” That was when Simitis abandoned the political gathering and resigned.
In 2010, the then Greek Prime Minister, Giorgos Papandreou, stated “The money is there.” Papandreou’s complaint was that the rest of his statement, “The question is where the money is. If money goes to the tax evasion, to opacity etc. then we will have none to give,” was never announced by the media.